Contra evolved from English country dance, and modern contra has a bounce to it that has given it it’s popularity today. But with that evolution, something was lost as well.

There is a stateliness in the dancer’s approach to country dance that is missing from contra, an elegance in the touches and transitions from dancer to dancer that you don’t see in the more energetic contras.

The dances themselves are clearly fore-runners of contra, but have a much richer variety in the forms and structures. For example, in contra you always find yourself in groups of four, with one couple moving up the line and the other down. But in English country dance, that’s not necessarily the rule. You might hear, for example, the caller ask for "hands six." 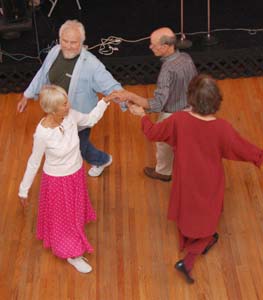 In a "hands six" dance you’ll learn the roles of couple 1, 2, and 3. The dance progresses like a contra, except the #1 couple moves one way and the #3 the other with the original #2 now becoming a #3.

Confusing? surprisingly not so. The hands six dance opens up possibilities for some very nice sequences of figures. One dance in particular had, at one point, the #1 couple in the middle of the six, come into the center for a gypsy and then each partner in that couple slides away up and down, splitting the couples on the end and going into a "hey for three" and melting from there into each couple doing a two hand swing. Sweet.

For dances with four in a set, like contra, there is more emphasis on dancing as a set of four. This is evident in the fact that in addition to the terms #1 and #2 couple, there is also a #1 and #2 corner pair. You get a much stronger feeling of dancing as a group of four than you get in modern contra.

You might have heard the evolution of a contra dancer explained as: first you learn to dance with your partner, then with the ring of four, then with your whole line and finally with the whole dance hall.

It is much easier to see and enjoy that larger pleasure of dancing in country dance. It does not have the emphasis on partner and neighbor swings that contra does. You interact with your partner on the same level as you interact with the other dancers, both male and female, in your set of four or six.

The music is a little different as well. It’s old English music, not surprisingly, and very beautiful to dance to. A recorder is as much a part of the band as any other instrument. What’s the music like? Think Greensleeves. It’s not uncommon to have waltz timing in the music, encouraging a more waltz-like stepping through the figures.

So if you enjoy beautiful old music, want to understand and grow your understanding of the possibilities in social dancing, challenge yourself with new patterns, then come out and experience the sublime pleasure of English country dance.

Our Asheville English country dance is a very friendly dance. All the dances are taught, and, during one complex dance that had some dancers confused, the caller actually stopped the dance, explained the bit that was causing difficulty, and restarted the dance so everyone could enjoy the wonderous flow of that particular dance. Which I, for one, did.